Home / Insights / What happened to the inverted pyramid?

What happened to the inverted pyramid? 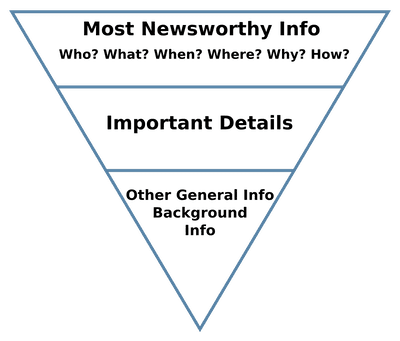 Many people will recognise the inverted pyramid style of story construction, even if they don’t know the name.

The inverted (or upside down) pyramid is historically the gold-standard way to tell news stories: you put the most critical facts at the start, then the importance of the information decreases as the story descends.

There were two benefits to this way of writing:

But at the recent Corporate Affairs and Communication Leader’s Summit in Auckland, Stuff’s Chief News director, Keith Lynch, told his audience the inverted pyramid is no longer a journalist’s go-to.

The culprit, as with so many things, is the internet. Specifically, the business model applied to online journalism. With online news, the longer a reader spends looking at an article, the higher a publisher can charge for the advertising associated with it.

That means a news organisation needs to encourage readers to stay with the story to its end – and that requires writing in non-traditional ways.

It could mean keeping key information until several paragraphs down, writing a news story in feature style, or teasing a twist at the end.

It also means an increased chance of non-traditional ‘news’ stories being picked up by an online publication – as long as they are skilfully presented in a way that encourages the reader not just to click, but to linger.

There will always be a place for the inverted pyramid in hard and breaking news, but the online news environment means the skill is as much in telling the story as in reporting the news.