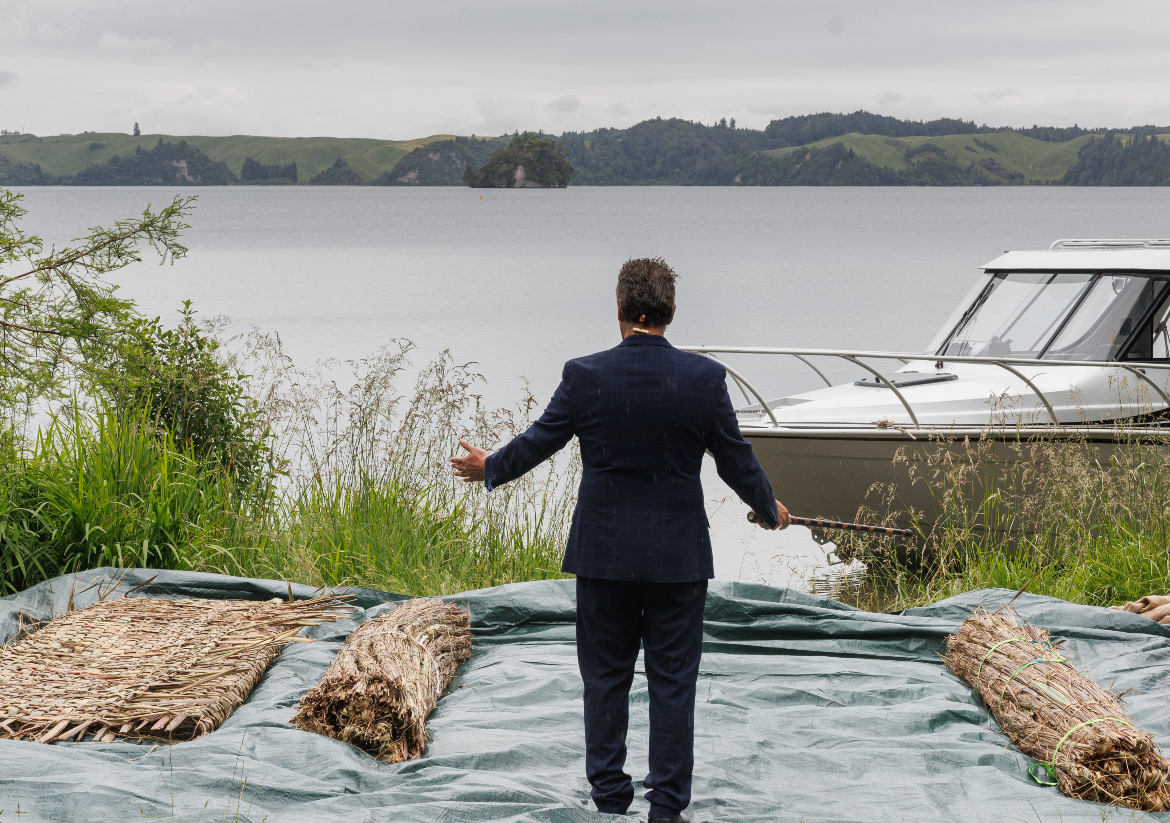 Centuries of knowledge in traditional Māori art and craft has been combined with environmental science to combat lake weed and improve water quality in the Rotorua Te Arawa lakes.

Led by Te Arawa Lakes Trust, with support from Toitū Te Whenua Land Information New Zealand through the Government’s Jobs for Nature programme, the Uwhi will be trialled in Te Arawa lakes as a low-cost, native alternative to imported hessian weed mats.

Te Arawa Lakes Trust has been working with weavers from Te Roopu Raranga Ki Rotorua to create the 2.5m by 5m Uwhi.

Now that the Uwhi are secured to the lakebed, the divers will monitor the site each month to gauge weed growth, kōura restoration and overall effectiveness of the Uwhi.

Trust Biosecurity Manager, William Anaru, says the aim of the kaupapa is to help restore the Rotorua Te Arawa lakes and reduce the need for costly control programmes.

“We have had many discussions about the logistics of making and laying the Uwhi. We approached Te Roopu Raranga Ki Rotorua to see if we could bring our collective knowledge together and combine mātauranga Māori and science-based approaches to create a natural solution,” Mr Anaru says.

The weavers have used traditional weaving techniques of various structural foundations so the team can determine which is the most effective at controlling weeds.

“By using freshly cut harakeke we are confident that the right choice has been made not only from an environmental standpoint, but also biological, with additional potential to grow our kōura population,” Mr Anaru says.

The Uwhi have been installed along the lakebed and secured using pegs made from a material compatible with harakeke. Tau koura (a traditional fishing method) will be used to monitor the effect the Uwhi have on the return of kōura to the site.

Harakeke itself is an abundant natural resource with many uses. It is well known for its durability and versatility, and is used in medicine, cooking, weaving, whatu, netting, fishing, and hunting.

Mr Anaru says this is the first time the Trust has had the opportunity to create a space for a Māori approach to weed management.

“This is a prime example of our ability to draw on our traditional methods and knowledge to create and test a modern solution. We have high hopes for the trial and being able to share our experience with the rest of Aotearoa.”

Toitū Te Whenua Biosecurity and Biodiversity Manager, Tracey Burton, says it’s exciting to partner in the kaupapa, which recognises the value of supporting hapū and iwi to achieve their aspirations for their whenua and wai.

“We’re proud to support research which has the potential to change the way we manage lake weeds in the future, while contributing to positive environmental and cultural outcomes and creating jobs in the region.”

“Tackling aquatic weeds takes a team effort and it’s great to be working alongside the Trust to explore innovative control approaches.”

“Check Clean and Dry remains our best line of defence for preventing the spread of invasive pests between waterways in the region,” Ms Burton says.